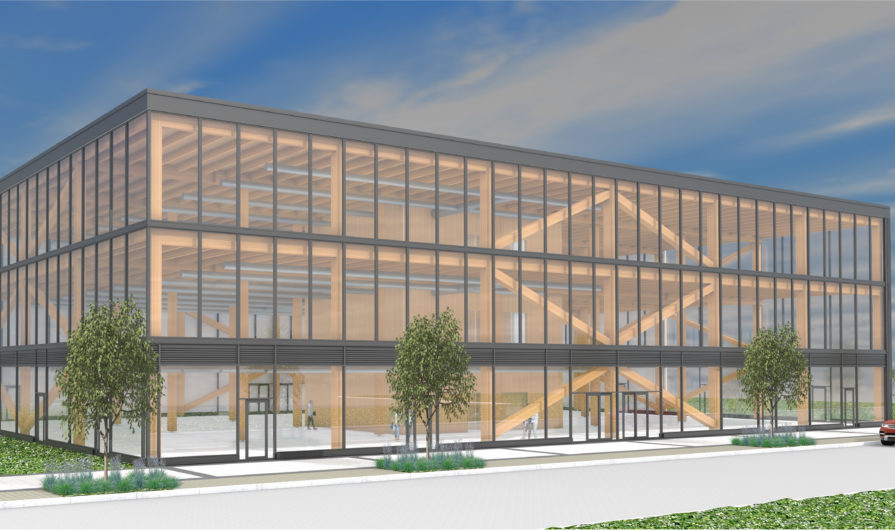 Despite the race to build the highest mass timber building, the low-rise market segment is still an important one for the wood industry considering the square footage built year after year and the relatively low market share enjoyed by the industry. In Canada alone, buildings of three stories or less accounted for 55 million sq.ft of construction in 2020. This is why the Canadian Wood Council (CWC) developed a low-rise market development strategy back in 2017. After some preliminary consultations, it was determined that the best way to encourage specifiers and developers to increase the number of low-rise timber buildings was to provide them with sound examples of effective and attractive structural systems applicable to numerous types of low-rise buildings. These new structural systems were initially developed during multidisciplinary workshops held in Vancouver, Toronto, and Québec City in 2019 and further refined until they were ready to be published in Low-Rise Commercial Construction in Wood – A Guide for Architects and Engineers. In this 2021 CWC publication, six examples of structural systems are included. Three examples are light frame, two are mass timber, and one is a hybrid structural system. The following provides a closer look at one of these structural systems: The Office/Retail Building with Composite Glulam Purlins & CLT on Gerber Beams.1

This three-story office/retail prototype structure is characterized by its large open floor plan, dramatic diagonal bracing around the perimeter, and a rectangular circulation and service core that can be offset from the center of the plan because it does not form part of the lateral system for the building (Figure 1). The overall length of the building is 152.2 ft. (46.38 m), and the overall width is 102 ft. (31.09 m). The building footprint is thus within 2% of the maximum 16,146 sq.ft. (1,500 m2) permitted by the National Building Code of Canada for an unsprinklered building.

As shown in Figure 2, the gravity load system for the structure comprises primary 14.375 x 15-in. (365 x 380 mm) glulam columns on a 25 x 25-ft. (7.62 x 7.62 m) structural grid. The primary floor glulam beams are 26.92 in. (684 mm) deep and run parallel to the length of the building. These beams are designed as a Gerber girder system, with the primary beams paired in alternate bays and cantilevering approximately 5 ft. (1.5 m) into the adjacent bay. Here, the paired beams are cut short, with the central section of the bay being spanned by a single, shallower glulam beam slotted between the paired beams to either side. The overlapping of the paired and single glulam elements occurs at points where the bending moment would be near zero for a truly continuous beam, thus increasing the beam efficiency. The resulting reduction in mid-span stresses is what enables the double beams to be replaced with the single shallower beam. Connection of the single drop-in segment is easily facilitated by the paired beams on either side of the drop-in span. The double beams sit on shoulders cut out of either side of the story-height columns (Figure 3). Column-to-column bearing is facilitated by a steel spacer to eliminate cross-grain material in the vertical load path. The columns are secured top and bottom with embedded steel rods epoxy-glued into the end grain. The other major component of the gravity system is composite CLT and glulam floor and roof purlins. Each composite panel consists of a CLT panel with two glulam ribs connected with inclined self-tapping screws.

These panels, which are 8 ft. (2.44 m) wide and 25 ft. (7.62 m) long, are dropped between the Gerber beams with the CLT panel bearing on top. Adjacent composite panels are joined with an inset plywood spline and the entire assembly is fastened with partially threaded screws through the CLT to the girders below at the supports. The combination of the Gerber beams and the composite panels results in a much shallower structural depth than would be the case with traditional beam, purlin, and panel systems. The floor panels are shown finished with a 1.5-in. (38 mm) concrete topping on a resilient membrane that reduces both impact and airborne sound transmission, and could also accommodate a radiant heating system, if desired. The roof assembly uses the same composite CLT and glulam panels, but then has an air/vapor barrier installed on top, followed by tapered rigid insulation and a waterproof membrane.

The lateral system shown here comprises diagonal glulam braces, located in two consecutive bays in the exterior walls on both long and short elevations of the building. These braces are aligned vertically and occur on every floor. The beam ends are connected to the main structural frame using steel knife plates and tight-fit pins, designed to provide the ductility necessary to dissipate lateral forces (whether these are wind or seismic) and prevent failure of the wood members. The even spacing of these braces provides the required torsional stability to the building, enabling the corner bays on all elevations to be fully glazed, if desired. Because the mass timber structural system provides the required 45-minute fire resistance without the need for encapsulation, the interior of the building benefits from the warm visual character of exposed wood. The bays in which the shallow infill Gerber beams are located have higher ceilings in the center of the span. The difference in depth between the primary and infill beams is sufficient for mechanical systems to be run perpendicular to the beams without reducing the ceiling height. The fact that the service and circulation core is non-structural means that (within the parameters of code-mandated maximum distances to exits) the core can be located to suit the organization of the building program.

Claude Lamothe graduated from McGill University in 1985 with a bachelor’s degree in civil engineering. After having worked for engineered wood products and forest products companies for close to 25 years, he founded his own consulting firm, Intra-Bois Inc.

Jim Taggart is an award-winning Vancouver-based architectural writer whose credits include the books Toward a Culture of Wood Architecture (2011) and Tall Wood Buildings: Design, Construction and Performance (2017, updated and expanded 2019). 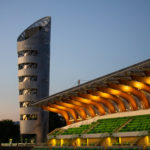