La Seine Musicale is a multi-purpose musical facility located on Seguin Island, in Boulogne-Billancourt, a western suburb of Paris. The island is best-known for the old Renault manufacturing plant, the largest European automobile manufacturer of 20th century, which was closed in 1992.

The site is 0.2 miles long, on a pointed edge of Seguin Island. The Eiffel Tower happens to be almost as long and as wide as the site. Here, Japanese architect Shigeru Ban with French architect Jean de Gastines, designed a multi-purpose musical facility with a total floor area of 392,882 sq.ft. The program includes a multi-purpose concert hall with 4,000 seats, a classic auditorium concert hall with 1,150 seats, a music school, and shops. The client requested something “monumental” and “symbolic” so instead of making a typically shaped building, the architect conceived of a precious “jewel”: the auditorium.

The auditorium is a vineyard style classic concert hall with seating that surrounds the stage. Its form is egg-like, and its surface is covered with mosaic tiles. The color of the tiles changes from emerald green to bronze red according to the lighting and the angle of vision. The mosaic tiles were inspired by the Japanese beetle, tamamushi, and specially produced for the project. The foyer around the auditorium is covered with glass and the gridshell structure is spruce glulam with beech connection joints. More than 1,700 unique timber elements comprise the double curved glulam structure.

The use of solar panels was a requirement. Instead of placing the panels on the top of the roof, the architects designed a triangle “sail” using the solar panels. The sail is placed around the auditorium and it moves according to the sunlight, just like an ordinary sail that moves according to the winds. Thanks to its movement, the sail is facing the sun all the time, which allows efficient power production while creating shade for the auditorium foyer.

Inside the auditorium, the walls are covered with corrugated wooden strips. Several typographies were made by composing the same module differently, considering the acoustic reflection and absorption. The variety of patterns ensures the acoustic quality of the space through a homogeneous diffusion of sound waves.

On the exterior, massive walls were designed using undressed/exposed concrete since the master plan required something more industrial like the former manufacturing plant. The jewel auditorium is a stark contrast with its wood structure.

The commercial axis which defines the island’s master plan extends through the building. When there is no concert, glass shutters and bi-folding doors open up so that the public can use the Interior Street (rue Intérieure). Once inside, there are shops, a ticket office, restaurants, the foyer, and windows through which visitors can see inside the rehearsal rooms. The street leads to “Place Rodin”, a sculptural terrace at the point of the island.

The greenbelt, the other axis defined inside the master plan, also extends into La Seine Musicale. The public is invited up the monumental exterior stairs to access to the rooftop garden.

It is the architect’s desire to build public facilities such as museums and concert halls which are open to everyone, including those who may not be music or art devotees and La Seine Musicale is a wonderful example. 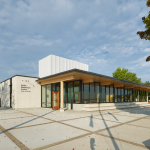 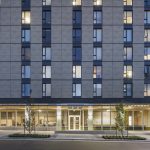