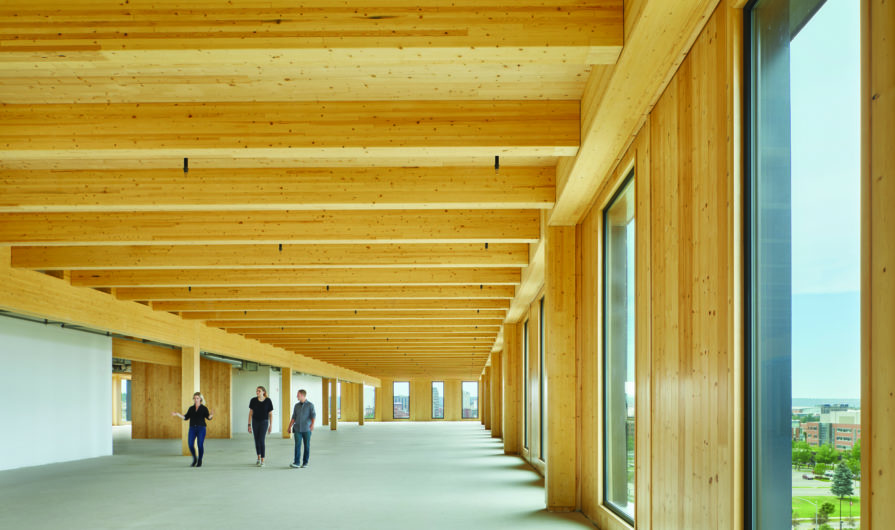 How to manage flanking noise in mass timber buildings

Once considered a buzz phrase, biophilic design has become an important part of architectural and interior design, perhaps even more so recently, as many have come to appreciate the impact nature has on our mental health and well-being. Derived from the Greek words for life and love, biophilia means a love of nature. It brings the outside world inside, integrating natural elements like plants and wood into the building interior. Examples include skylights, plants, green walls, healing gardens and wood finishes.

When wood is used as a structural element and there is a desire for increased amounts of exposed wood, it introduces significant acoustical challenges, particularly for secondary or indirect paths of noise transfer. Direct sound travels through floors, ceilings or walls and allows loud noises in one unit to be heard through a dividing wall. Indirect sound travels through structural elements, such as the floor, joists or shear walls, as well as ceiling cavities, pipe penetrations, junctions between floors and walls, and cracks. These secondary sound transmission paths are known as flanking paths, and wood buildings are more susceptible to noise issues due to the number of paths available for sound to travel, other than directly through the demising partition itself.

Flanking is an issue in all types of structures but more so in lightweight construction. For comparison, a typical mass timber floor is about 20–25 psf and a typical concrete floor is 80–100 psf. In heavy concrete construction, flanking noise starts to show up when designing for very high STC (sound transmission class) ratings (typically 65+). STC measures how effectively a wall, floor or ceiling can reduce the transmission of airborne sound between rooms. Generally, the higher the STC number, the less sound is transmitted. An STC rating as high as 65+ would be used in a facility like a recording studio where you don’t want any sound transmission between adjacent spaces. The room within a room construction typically used for theatres, studios, and loud mechanical rooms is done to provide high STC ratings for these spaces and also reduce the flanking sound transmission by protecting the structural elements from noise generated in the room.

In lighter weight construction, flanking issues become prevalent at lower STC ratings which is why it can be more of an issue with mass timber. High STC ratings at the demising wall alone will not guarantee a high level of sound isolation because flanking noise is unaccounted for in STC tests for partitions that are determined in laboratories. ASTC (apparent sound transmission class) is a more realistic measure of the actual sound level transmitted between adjacent spaces in a building since it includes noise transmitted through walls, ceilings, and floor junctions. Leaving mass timber exposed compounds the issue by adding to the flanking paths. Exposed timber structural walls and ceilings reduce the ASTC rating and complicate the sound isolation design.

There are no requirements or building code recommendations for sound transmission in commercial spaces. The industry standard is to provide approximately an STC rating of 50 for floor separations in commercial buildings, particularly a multi-tenant facility. Most residential codes in North America mandate a specific sound performance or STC rating for walls and floor systems. In the 2015 National Building Code, a strict requirement for ASTC ratings between units was added. Like with STC, a higher ASTC rating signifies the sound separation between units will be better. Adjacent units in a building must now be separated by a wall, floor, or ceiling partition with an ASTC rating of at least 47.

Achieving these ratings when working with an exposed mass timber wall or ceiling is more challenging and can be costly but not impossible to solve. If acoustical planning is part of the early design process with consideration of flanking paths and sound isolation, it is possible to minimize costs and enjoy the benefits of a mass timber building without compromising acoustic performance.

Separate noisy and quiet spaces in the design: The location of noisy versus quiet spaces should be selected carefully to avoid the need for high levels of sound isolation. This principle can be applied to any type of building, but this is more important with exposed mass timber because sound flanking makes it more challenging to achieve high ASTC ratings. This can be accomplished in two ways:

Plan to have buffer spaces between any noise-generating space and a quiet one; for example, a fitness room in a residential tower should not be directly adjacent to a residential unit. At minimum, there should be one buffer space in between. The buffer space can be any area where noise is not a significant concern such as storage, quieter electrical/mechanical rooms, lobbies, or corridors. Early in the design, it is possible to either move the rooms around or build in a buffer in between.

Add resilient pads between structural timber elements: To avoid sound travelling to the adjacent horizontal room via the floor, it is necessary to provide breaks or discontinuities in the wood structure. This can be accomplished by adding resilient pads between structural elements such as between timber slabs and between the floor structure and shear walls or beams. If mass timber is going to be left exposed at the ceiling, the partitions should be laid out so STC-rated partitions line up with the joint between timber slabs wherever possible. Using a resilient pad between the timber slabs breaks the flanking path above the wall and will significantly increase the ASTC rating between rooms. This should be considered early in the design so that the structure and room locations can be coordinated to allow for high STC partitions to line up with joints in the timber slabs

Incorporate decoupling elements into the wall or floor assemblies: These break the direct connection between one side of an assembly and the other and reduces the amount of noise that travels through the structure. This may include a mat or rubber floor underlay, as well as resilient wall connection elements like resilient channels. These have the double benefit of protecting the structure from flanking noise and also increasing the direct STC rating of the wall or floor assembly; however, this means that the timber will not be left exposed.

Don’t bare it all: If you choose to leave a timber wall or ceiling exposed, do it selectively; for example, if a single CLT facade panel spans two adjacent rooms that require an STC-50 separation, it should only be left exposed in one room. This strategy should be used when it is not possible to have a joint in the mass timber which is common when several small rooms are located along the facade as these are likely to be spanned by a single facade panel.

Determine the right mass timber option: Not all mass timber is created equally so pick the one that is best suited for your needs and noise control. There are several options ranging from the type of timber to the thickness. Common types in Canada are CLT, NLT and DLT. There are very few laboratory test results for flanking noise but for overall noise control, controlled laboratory STC testing found CLT performs slightly better than other options as the laminates are cross-oriented in a panel and have less susceptibility for small holes and cracks.

Choose the right thickness of mass timber: More mass means better noise control in order to achieve the same sound levels expected from steel and concrete. This can be accomplished by selecting thicker mass timber. As thickness increases, both direct STC and flanking performance increases. If you’re looking to expose the mass timber, seven-ply CLT would be much more effective than five-ply because as the thickness increases, so too does the STC rating. Keep in mind that while the thickness will impact your budget, it can reduce the floor topping and flanking control requirements which will have associated cost savings.

While dealing with flanking noise from mass timber construction is fairly new in North America, Europe is more experienced having been at the forefront of mass timber design. In fact, most of the products used for decoupling and improved sound flanking control come from Europe.

Much of the key learnings reflect the European experience. One of the biggest takeaways from all mass timber projects here and in Europe is the need to consider acoustics and flanking paths very early on in the process, particularly if there is a desire to incorporate an exposed mass timber wall or ceiling. There are ways to work it into the layout so any potential challenges are addressed at the outset rather than dealing with flanking issues later. If this is taken into account earlier in the process, it will be easier and cheaper to expose the timber.

If a project is well underway, and it is not possible to implement some of the solutions, the only option may be to install drywall to cover up the timber. This should be considered a last resort and can be avoided with proper planning. Trying to rectify flanking issues later in the design or after the building is built will be more difficult and likely more costly. It is possible to have good sound isolation in mass timber buildings as long as it is designed appropriately and early. 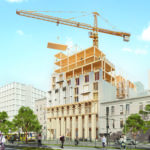 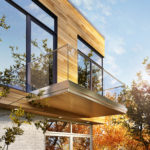 Next Story:
Preserving a Place for Wood in North American Infrastructure