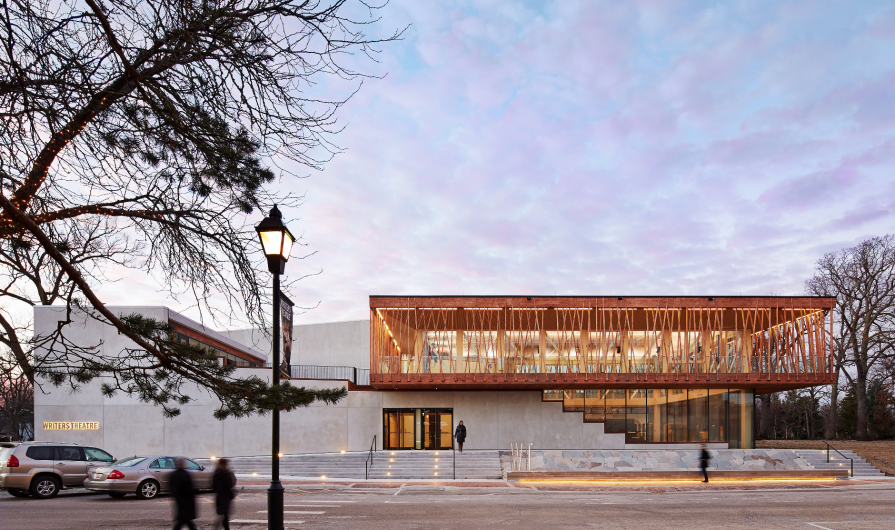 Theater’s ability to bring people together across social boundaries makes it an important aspect of urban living. Writers Theatre in Glencoe, IL, is designed to build on that as a 21st-century theater company that serves as a cultural destination for the region.

Organized as a village-like cluster of distinct volumes that surround a central hub, the building’s form resonates with the character of Glencoe’s downtown. The theater’s two performance spaces, a main stage and a smaller black box venue, employ staging and seating configurations to maximize the sense of intimacy between actors and audience and enhance the immersive experience. Both performance venues, in addition to rehearsal space and public zones, open onto the central gathering space of the lobby.

Designed to accommodate informal performances, talks and community events, the lobby is structured by great timber Vierendeel trusses with a lighter wood lattice supporting its second-floor canopy walk. This walk employs an innovative structural system, putting wooden members into strict axial tension. Using Port Orford cedar battens with a 2 x 3 cross-section, the canopy walk is hung from wooden glulam roof beams. An outer layer of battens connects to the suspended glulam beams below without mechanical fastening, instead relying upon the material properties of wood to produce a flared wedge connection. The connection is designed to fit into matching grooves cut into the lower glulam beams, akin to traditional Chinese and Japanese wood joinery methods; a slight undercut prevents the batten from slipping forward when in its locked position. The shape of the detail likewise ensures this strong connection.

Animating the facade through its pattern and experiential quality, the canopy walk creates an iconic identity for Writers Theatre while also providing a dynamic space for people to gather. It works to extend the drama of performance from the main stage to the lobby to the streetscape beyond, revealing the forces and materials that make the structure possible. Lowering the project’s overall carbon footprint by replacing steel structural systems with wood, the canopy walk also improves the environmental performance of the building through self-shading.

An alternating pattern of Port Orford cedar clads the exterior of the 99-seat theater, complementing the wood detailing of the canopy walk. On the interior, stained elm harvested on site was used to clad the lobby’s tribune seating and concessions, contributing to its inviting ambience. Elm harvested on-site was also used for woven millwork, which serves as a natural marquee, and bookshelves that house playbills, programs, and past scripts, invoking both the history of the theater company and the site.

The theater itself engages its surroundings through transparent visual connections and ivy-covered backdrops to the surrounding parks. In fair weather, the lobby can open to the adjacent Women’s Library Club Park, allowing the energy and interaction of the theater to extend outward into the community beyond. At night, the theater glows from within, drawing interest and activity to this important civic and cultural anchor. 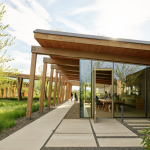 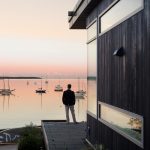