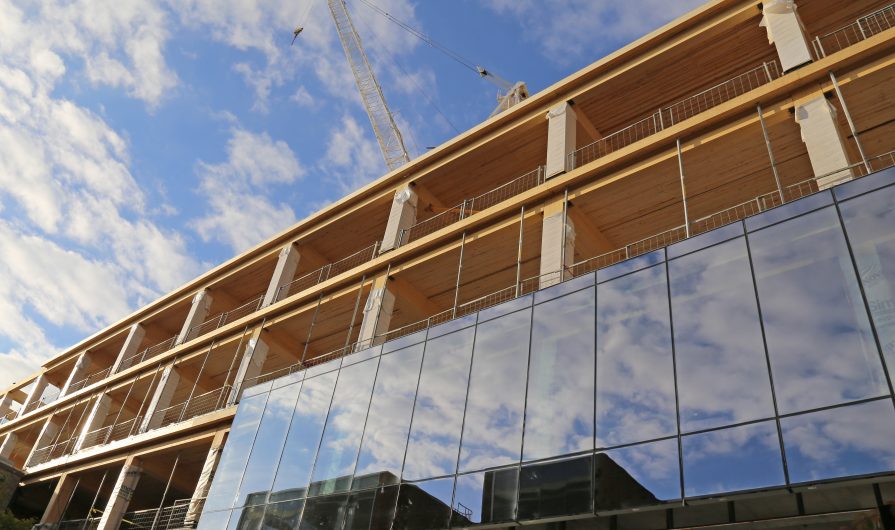 This is the third installment (of four) for our serial profile of 80 Atlantic Avenue in Toronto. Progress on the project has been steady, and now we’re focusing on the building envelope as the structure gets enclosed. If you missed the first articles, you can find previous issues of the magazine in our online archive at WoodDesignandBuilding.com.

At the close of 2018, the building reached structural completion and assembly of the building envelope began. Three sides of the structure are being finished with prefabricated Ceramitex large-format tiles that will be installed with a mast climber platform. These facades, which include the east-side main entrance of the building that fronts on Atlantic Avenue, will have punched window openings with operable windows.

The large-format tile was chosen specifically to respond to the heritage context of the adjacent streets, with only the non-street-facing facade to be glazed. The tiles for the three street-oriented facades (one is a lane) are installed as the face of a rainscreen cladding system attached to adjustable girts, behind which is semi-rigid insulation. All insulation is in front of the AB/VB membrane, and the entire assembly is supported by structural steel studs.

The fourth, south-facing side of the building is a dramatic, high-visibility glass curtain wall that ties into the heavy timber superstructure with a custom anchor. The connection is similar to the kind that would be used for concrete, but it was redesigned specifically for the wood frame and was custom manufactured by Timmerman Timberworks.

Assembly of the building, including the south curtain wall, has gone very smoothly, thanks in large part to a valuable collaboration that used this project as a teaching tool. The entire project team participated in a training exercise at the College of Carpenters and Allied Trades, where a full-scale mockup of one of 80 Atlantic’s corner bays was completed. This hands-on trial run gave every player a clear understanding of the scale, scope of work and sequencing for the project.

The architect, structural engineer, fire engineer, code consultants, fabricators and installers were able to see first-hand how everything would fit together, and the design and installation teams benefited from the chance to work directly with the manufacturers. Assembly of the curtain wall afforded the team an opportunity to refine the installation technique and to work out how the fire-stopping would be applied.

The unitized curtain wall frames were factory assembled, having the glass four-sided structurally sealed. A 10mm outboard glass lite was used in order to achieve a flat look. The frame assembly is a typical Alumicor 2600 SM series with interlocking vertical male/female mullions and horizontal stack joints.

On site, the anchors were installed at each vertical mullion location. The anchors are HSS 8×3-in. sections that are lag screwed to the NLT floor slab. The unitized frames were then lifted into place, one by one, and the vertical mullions were connected to the anchors installed in the floor above – so the frames (with glass already installed) hang from above like a curtain. The adjacent frames connect together through the male/female mullion, so each vertical mullion is really two parts, and the frames above connect to the lower frames through the male/female stack joints.

The entire south facade was installed over the course of just a few weeks by Stouffville Glass. The high-performance, glazed wall floods the building with natural light and has operable windows for fresh air to enhance the comfort of the building’s future occupants. Special consideration was given to the glass coatings to manage solar heat gain and control glare. From the exterior, under certain lighting conditions, the extensive glazing will allow passersby to see through the exterior facade to the dramatic and beautiful exposed timber structure inside. 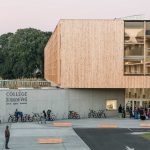 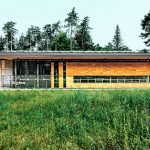