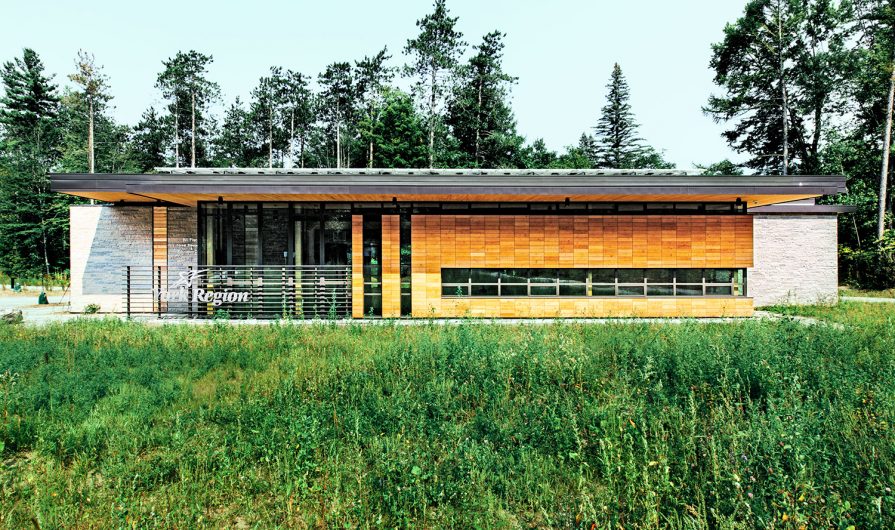 Built on a previously developed site and surrounded by a 90-year-old forest, the Bill Fisch Forest Stewardship and Education Centre is designed to be an integral part of one of the most successful forest regeneration projects in the world, helping residents of York Region learn about the importance of natural resources and forest ecosystems.

Situated between Toronto to the south and Lake Simcoe to the north, the Regional Municipality of York is home to just over 1.1 million people, many of whom were drawn to the area’s affordable suburban housing over the past several decades. Prior to that, York Region (formerly known as York County) was known for its rich farmland, and many of the native forests were cut down as the area’s population grew. After significant soil erosion and demand from citizens to restore the nearly forgotten forest, however, the region set to work reclaiming its nearly lost forests. As a result, the York Regional Forest is internationally recognized as a leader in site restoration and forest management, and it is the first public forest in Canada to be certified by the Forest Stewardship Council.

Conceived as being “of the forest” and not “in the forest,” the Bill Fisch Centre replaced another facility that was on the site since the 1940s. The single-storey, 4,000-sq.ft. building includes space for corporate meetings and community educational programs. It was designed for an almost 100-year life cycle, respecting the heritage and legacy of the old-growth forest that surrounds it on all four sides.

Cross-laminated timber panels are the structural elements for the exterior walls and are also their exposed interior finish. The insulation is located on the exterior of the CLT walls, and the cladding is reclaimed Douglas fir. Unlike in most post-and-beam buildings, the structural beams are located above the CLT roof to provide interior clearance and a clean appearance for the ceiling. The glulam columns that support the beams have a shoulder at the top, over which the CLT roof panels were placed. The shoulder does not provide structural support for the CLT panels; it provides a gap-free joint between the columns and the roof panels. The CLT roof panels and the entire structural load of the roof are suspended from the glulam beams by means of self-tapping, engineered screws and bolts.

The predominant interior finish is the exposed surfaces of the CLT wall and roof panels. The CLT and glulam columns are coated with a zero-VOC stain, which is used on all exposed surfaces. Several featured interior wall panels are clad in maple-veneered, FSC-certified plywood. These panels are located within the administrative areas of reception and open office workstations. Similarly, the open office areas are separated from the circulation corridor by a series of horizontal maple louvres which are supported on a metal frame. Reclaimed ash salvaged from the area is used for the main entry reception desk as an educational feature. It retains the tracks of the emerald ash borer insects that have devastated ash forests in Ontario.

The numerous floor-to-ceiling windows created a challenge for developing adequate shear wall strength, which was provided by using tie-down connections and vertical reinforcing plates for the portions of CLT walls between the windows. The results are worth it: Every occupied interior space features windows that provide access to fresh air, and natural light is abundant. Operable windows at the clerestory also provide ventilation to circulate air between the upper and lower windows. With no other cooling for the building, an automation system opens windows when the outside temperature exceeds 10°C.

The structure is designed to generate more energy than it uses and feeds excess renewable power back into the grid. This is made possible through roof-mounted photovoltaic panels, and energy-conserving features such as a high-performance building envelope, heat recovery ventilators and LED lighting. On an annual basis, the Education Centre is expected to have a net positive energy balance of 8 mWh. Heating energy is provided by a wood-burning masonry fireplace fuelled by locally collected deadfall – but, in accordance with Living Building Challenge requirements, the wood heating is not a significant contributor to the energy performance of the building.

Similarly, the project can be described accurately as “net positive water,” with all water used in the building returned to nature just as clean – if not cleaner – than it was before. Water systems and components include a well water supply system with non-chemical treatment, rainwater harvesting system including cistern, pumping and treatment devices and low-flow plumbing fixtures. The building is connected to two wells, one existing and one new, to meet the demand for potable water. The non-potable water is provided from on-site groundwater and rainwater collected on the roof of the building and drained into an underground cistern.

The Bill Fisch Centre is intended to be a living demonstration that a highly green and energy-efficient structure also can be nurturing, comfortable and healthy – without compromising aesthetics and the quality of the indoor environment. Right from the start, the Certified Living Building was designed to be completely integrated with the surrounding ecosystem. This, along with the extensive use of wood, creates a sensation of biophilia that goes well beyond interior patterns and finishes. 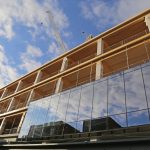 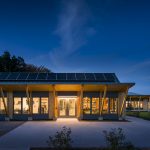 Next Story:
Hitchcock Center for the Environment