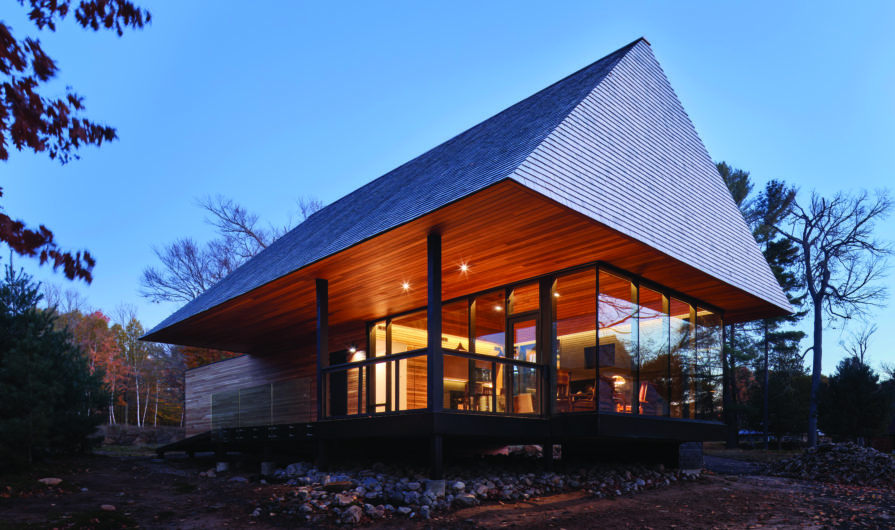 Situated on land steeped in history, these guest houses echo the voices of Muskoka’s past

Designed by MacKay-Lyons Sweetapple Architects, winners of a 2017 Global Award for Sustainable Architecture and many other accolades, this project is inspired by its environment. The design process began by listening to the land – and on Bigwin Island, in Northern Ontario’s Lake of Bays, there is a lot to hear. Named after Ojibway Chief John Bigwin, the island is a place of sacred significance for the region’s Indigenous population. The first golf course on Bigwin Island was built in 1922, and for decades the island was the site of a glittering luxury resort, the summer home of Canadian industrial titans, Hollywood stars and even the Dutch royal family.

This development is part of a plan for the island’s revitalization. The property owner rejected a proposed 150-room hotel in favor of 40 guest houses, ranging from 1,230 to 1,350 sq.ft. each, and launched a design competition for the project, inviting proposals from six Canadian architectural firms. The vision, laid out in the competition’s design brief, was a project that would respect the island’s history, the environment and the Muskoka region’s distinctive architectural aesthetic, while also employing practical construction techniques and maximizing energy efficiency and sustainability.

At once familiar and experimental, respectful and assertive, and durable enough to stand up to the demanding climate of their location while elegantly referencing its heritage and beauty, the Bigwin Island Club Cabins offer a balanced, inventive and sustainable response to a complex architectural challenge. An important principle in practice for both the client and the architect is to touch the land lightly – to minimize disruption of the landscape. According to the firm, the island’s deer are the real architects of the project. The cabins’ sheltering Muskoka shingled roofs appear to float on the grazing line that the deer have created in the forest, affording views from the center of the island to the lake. This architecture strives to evoke a timeless, archetypal experience of dwelling in the forest.

Crafted from natural materials with a quietly assertive design, the cabins reference the big, sheltering roofs of Muskoka’s historic cottages and boathouses, while also evoking the interior of a canoe without veering into kitsch. Each cabin is assembled from a simple kit of parts: a screened-in porch, a deck, a hearth, a great room, a sleeping box and a roof. An extruded box, clad in shiplapped wood, adjoins a glass pavilion holding an open-plan living and dining space, which is topped by a deep hip roof clad with cedar shingles. A geothermal heating system harvests heat from the lake and radiates it from the floors; in summer, a natural, passive ventilation system channels hot air up and away through the peaked roof.

The exterior is understated, and the interior is sensuously dramatic, airy and gracious, with the main living space of the pavilion rising to a peak. Shiplapped wood also lines the interior of the bedbox and hearth, enhancing the seamlessness between indoors and out. The room is naturally lit from above via a periscope window in the gable.

The ambition of this project transcends the individual guest houses. The buildings engage not only with the landscape, but with each other; they are sited in clusters, where their transparency and openness put them in conversational relationships. The spaces between them are small enough to allow neighbors to wave each other over, and some of the cabins encircle meadows ideally sized for cookouts and games. 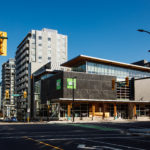