Europeans in the Lead 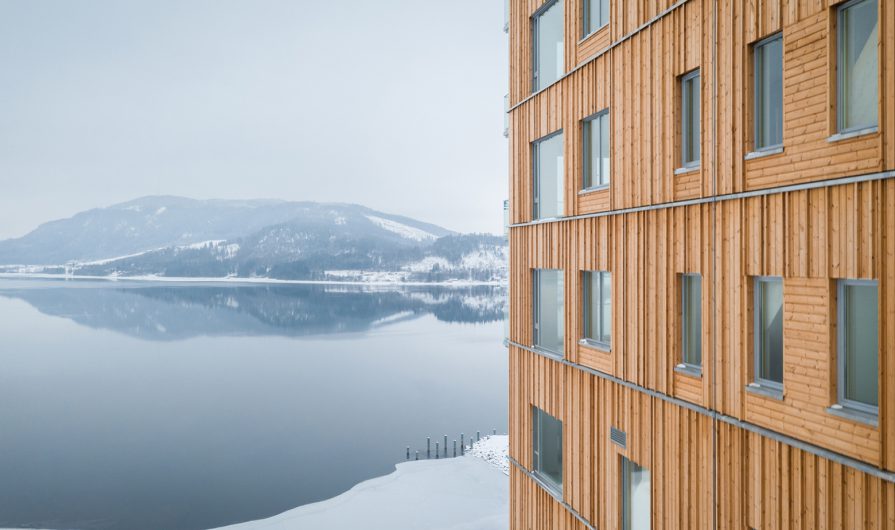 The race to be tallest, biggest and greenest

As wood’s resilience, versatility, cost-effectiveness and environmental benefits are becoming better understood,
high-rise wood construction – whether hybrid or completely mass timber – is growing increasingly popular throughout the world. While innovative building design is fueling wood’s resurgence, Europe rightfully claims a leadership role in promoting the use of mass timber. This February, French President Emmanuel Macron announced that by 2022, the country would aim for building all new public buildings with at least 50 percent wood and/or other bio-sourced materials; the decision was inspired by the low-carbon mandate introduced by Paris, which requires all structures eight storeys or taller to be constructed of timber for the 2024 Summer Olympics.

A 2017 report by the Council on Tall Buildings and Urban Habitat revealed that the majority of timber-based projects seven storeys and taller were being constructed in France, Austria and Norway. While some of those projects, such as Michael Green Architecture’s 35-storey Baobab tower in France, are presently unconfirmed or postponed, others were completed recently – including what is now the world’s tallest timber tower, Norway’s Mjøstårnet in Brumunddal, a small town near the country’s largest lake; the building’s name translates to “the tower of Lake Mjøsa.” This area is famous for its forestry and wood processing industry, located about a two-hour drive north of Oslo.

Initially the plan specified a height about 15 ft. shorter, but when the client challenged the design team to consider a solution to maximize the height, the designers used curved edges for the glulam pergola topping the structure; this reduced the wind load while allowing for a more robust structure. As a result of the increased height, Mjøstårnet became the country’s third tallest building and its tallest mixed-use structure.

More than 123,600 cu.ft. of timber, equivalent to about 14,000 trees, were used to construct Mjøstårnet. The majority of wood components originated from nearby sustainable forests; the glulam structures were produced at Moelven’s factory less than 10 miles from the building site. The CLT used in staircases and balconies was supplied by Stora Enso, while the LVL for wooden floor elements was supplied by Mëtsa Wood. Nordic Steel produced the metal timber connections. The Norwegian University of Science and Technology monitored the building during and after construction, and will publish its findings at a later date.

Meanwhile, in Vienna, Austria, another of the world’s tallest wood buildings recently opened to its first commercial tenants, while the hotel plans to open later this year. Designed by RLP Rüdiger Lainer + Partner, the HoHo Wien comprises five structures that contain a hotel, apartments, a restaurant, wellness center and offices, culminating in a tower that is 24 storeys and almost 276 ft. tall; this makes it the world’s second-tallest wood structure.

The hybrid structure is built with a concrete foundation and stair/elevator towers, along with glulam beams, CLT walls and prefabricated floor systems made of CLT and concrete. The interiors predominantly feature exposed structural wood; the architect estimates that close to 75 percent of the structure is made from timber. Four prefabricated building components – columns, joists, deck slabs and facade elements – simplified assembly, while the connections between ceilings and walls joined together in a modular system. The wood composite floors are secured to the building’s core structures and extend out to the facade. A small concrete ring beam at the exterior wall and floor interface ties all of the elements together.

Roughly 153,620 cu.ft. of wood are used throughout the HoHo Wien project, which has a gross floor area of
269,098 sq.ft. Considerable energy savings (estimated at 300,000 mWh) resulted from the use of mass timber instead of other materials, also saving approximately 2,800 tonnes of CO2
production, compared to an equal-size concrete structure. Other efficiencies such as photovoltaic systems are helping the building work towards LEED Gold certification.

The developer’s managing director, Caroline Palfy, credits Austria’s forest industry for supporting this sustainable method of construction. “The timber used for the entire project will have grown back in our country’s forests in only one hour and 17 minutes,” she explains. The nation produces more than one billion cu.ft. of timber each year, of which about 85 percent is logged.

Many recent wood projects are competing to claim the “tallest” title, including in Bordeaux, France. Currently under construction, Hyperion (above) by Jean-Paul Viguier will be the country’s tallest residential tower made of wood, with a 16-storey tower. Named after the world’s tallest tree – a California redwood – the project features three buildings with a total of 176 housing units, an underground parking ramp on two levels, an office building and shops. The first three levels are concrete, along with the main tower’s central core, which contains elevators and stairways. Topping this is a wooden structure with CLT floors and partitions, estimated to store approximately 1,000 tonnes of CO2. Completion for the wooden tower is planned for spring 2021, while the surrounding buildings and offices are expected to be finished several months earlier.

Another project in France which was completed last year – also reported to be the tallest wood building in the country – the Sensations Housing complex by KOZ Architectes is nominated for the 2020 International Award for Wood Architecture. (The same firm is one of several selected to create a mass timber athletes’ village for the 2024 Olympics in Paris.) This is the largest all-timber residential project in the country to date, built on a concrete foundation with three volumes, varying in height from eight to 11 storeys. Situated on what used to be a brownfield site in Strasbourg, the 146-apartment structure is built using glulam posts and beams, with structural CLT and shear walls. Steel cladding lends an industrial aesthetic to the exterior facade.

Not much more than a decade ago, in 2008, a worldwide benchmark was set in Sweden by its tallest all-wood building, Lagerhuset by Curt Arnold Salomon-Sörensen – a fourth-generation architect who is now in his 90s. The 10-storey grain warehouse in Eslöv was saved from demolition and converted into apartments: almost 102 ft. tall, it was unsurpassed in height (with the exception of Australia’s 10-storey Forte Tower) until Treet was completed in 2015, in Bergen, Norway. At 14 storeys and 162 ft. tall, the building designed by ARTEC held the title of world’s tallest wood building until the TallWood House at Brock Commons (in Vancouver, B.C.) was completed in 2017.

In London, another notable milestone in the race to be tallest is The Cube by Hawkins/Brown. The 10-storey hybrid timber, steel and concrete apartment complex was the tallest European building to use structural CLT when it was completed in 2015 – also surpassing the height of any modern wood/hybrid buildings in North America. A unique, twisted cruciform plan ensures each apartment has three external walls, for optimal daylight and views, while the exterior features Western red cedar cladding.

Tall wood buildings may have a relatively short history, but in that time, each new project illustrates the many ways that we can rethink architecture. With North American building codes now evolving to allow more flexibility in wood construction, it likely won’t be long before even more mass timber structures will reach taller heights on this side of the ocean, too. However, Japan plans to surpass even the most ambitious projects announced to date, with a 70-storey, 1,148-ft.-tall hybrid mass timber skyscraper designed by Nikken Sekkei, to be completed for the 350th anniversary of Sumitomo Forestry. With that date being in 2041, it remains to be seen whether this will, indeed, become the world’s tallest timber tower. 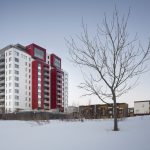 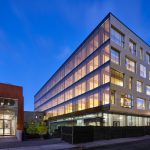