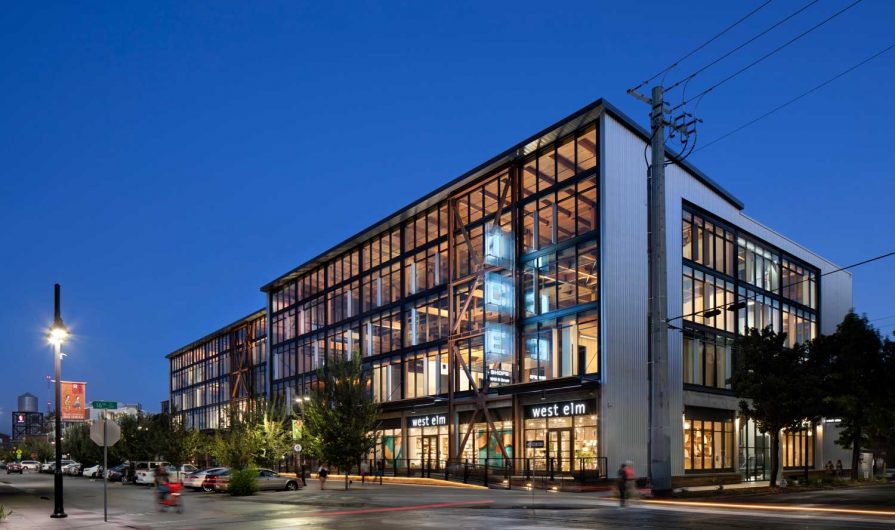 Many development projects are stalled by unforeseen obstacles, and in this case, several years ago a three-alarm fire destroyed a former ice company warehouse that was slated for restoration. In its place, the developer wanted to honor the original structure’s ambiance and history, while creating a modern hub that would enrich the neighborhood, a thriving arts and entertainment district. Construction began in mid-2016, and two years later, Ice Block 1 welcomed its first occupants. Called “a bustling village within a city” by the local media, this timber-framed mid-rise is the first of its kind for Northern California, and won this year’s U.S. Woodworks award for Commercial Wood Design (Mid-Rise).

The four-storey, mixed-use office/retail building in the heart of Midtown Sacramento consists of a concrete podium topped with three storeys of mass timber framing on a 20×24-ft. grid, bolted together with raw steel connectors; the timber frame is articulated on the exterior with a grid of steel channels bolted to the facade that translate the interior beams and columns to the building face. A clear glass envelope integrates the building with its environment, allowing passersby to view the interior features while allowing occupants to enjoy the urban setting. Solid wall surfaces clad with galvanized corrugated siding act as bookends for the glass.

Inside, the glulam beams and purlins are left exposed, with Douglas fir decking. The third and fourth levels are constructed of concrete topping slab, Acousti-Mat and plywood sheathing over exposed tongue-and-groove Douglas fir planks. The designers cantilevered the glulam beams off the tops of the glulam columns, creating an offset connection and allowing the beam deflection to counteract gravity loads. This allowed for shallower beam depths and resulted in a stronger bay frame, giving the upper floors a brighter, open aesthetic.

In a nod to the area’s industrial heritage, the exterior design features large structural steel braces and reflective aluminum fins and panels layered onto the facade grid, while outdoor podium spaces are shaded with traditional corrugated steel canopies suspended from the walls by exposed steel rod brackets.

A mix of restaurants and retail/commercial occupants, including West Elm and a craft brewery, means this popular destination is enjoyed by hundreds of people on a daily basis. As the architect intended, Ice Block 1 celebrates wood in the simplicity of its design. 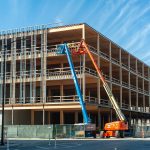 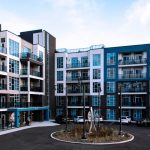