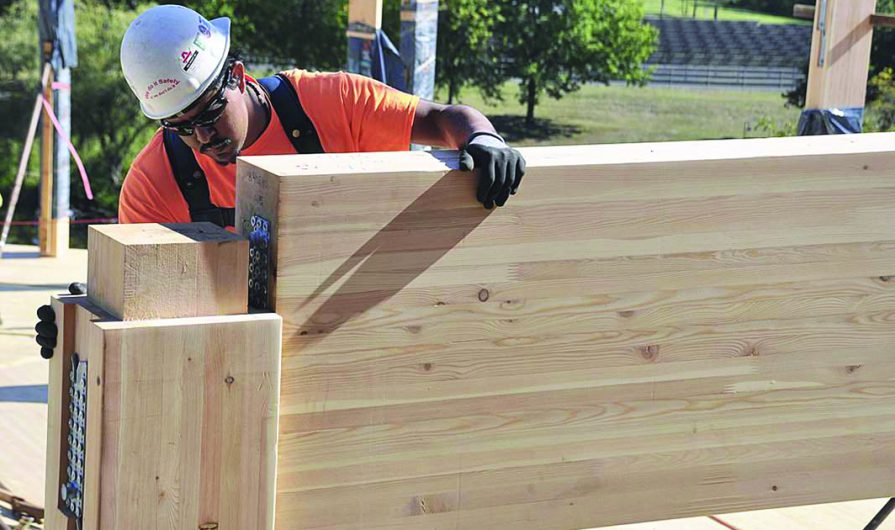 An accelerator in the mass timber revolution

Beam hanger systems have many advantages for mass timber construction. One of their main advantages is that they can be preinstalled in a controlled shop environment; this allows for a safe environment for workers by reducing on-site installation risks. Human error also can be reduced when doing the installation away from any extreme environmental site conditions. The preinstallation also allows for reduced crane time on-site and overall power tool requirements. All this permits the beam hangers to be dropped simply into place once the elements reach the site. This drop-in assembly of the beam hanger assists in a more efficient element sequencing in mass timber buildings.

The MTC beam hanger systems are a revolution in post and beam connecting systems. This system is a complete pre-engineered solution available in different capacities. The connectors consist of male or female components that drop in together for the fastest possible on-site installation. The higher capacity MEGANT connectors feature symmetrical clamping jaws and steel rods.

From a designer’s perspective, the MTC beam hanger systems can be a more cost-saving alternative to custom connections. The pre-engineered aspects of the system allow for all relevant design and geometry requirements to be available in easy-to-read design tables. These values are verified by extensive research, with the components fine-tuned even before supplying to the market; hence, the research and development phase that may be required for custom connections is eliminated.

The RICON S VS beam hangers

One of the most popular beam hanger systems on the market is the RICON S VS system connector. This beam hanger features a welded collar bolt with a short throat. The shorter throat allows beams that are not cut perfectly plumb to have a less significant impact on wedging the connecting element tight when dropping in beams.

Most importantly, the RICON S VS connector has been installed in various tall mass timber structures in both Canada and the U.S. Three of the most notable projects to use the RICON S VS connectors include the Rocky Ridge YMCA in Calgary, Alberta, Carbon 12 in Portland, Oregon, and the First Tech Credit Union in Hillsboro, Oregon.

The beam hanger plates are connected to the timber elements using Canadian Construction Materials Centre (CCMC) approved ASSY self-tapping screws. The modern self-tapping screw allows for a fast and simple installation, in addition to offering high shear and withdrawal strength even when placed in the end grain. Extensive testing on these systems has proven their reliable structural performance.

Carbon 12 is the tallest mass timber building in the U.S. as of press time. This building features a mixed commercial and residential occupancy in Portland, Oregon. The RICON S VS connectors have undergone specific interstory drift tests to investigate their response to the seismic activity in the area. The tests include placing the connector under CUREE protocol, which includes starting the cyclic loading from smaller amplitudes, then increasing the cycle amplitude before reaching the ultimate failure of the system.

The testing results include the RICON S VS connectors sustaining an approximate drift of 4 percent at ultimate failure. This shows that the connectors are suitable to sustain the maximum interstory drift of 2.5 percent allowed in the National Building Code. Other types of MTC beam hanger connectors such as the MEGANT also have proven high interstory drift performances. This further verifies the suitability of using the beam hanger systems in tall mass timber buildings.

The First Tech Credit Union building was one of the most high-profile projects of 2017 that utilized the MTC RICON S VS connectors. Connections in this building were fully concealed to effectively fire rate all the post-to-beam and girder-to-beam connections.

The RICON S VS connectors have undergone full-scale fully loaded fire testing in San Antonio, Texas, in collaboration with the SoftWood Lumber Board and other partners. During testing, the connectors were installed on full-scale members and placed in a furnace for 1.5 hours; the load applied on the members was designed to mimic a typical office loading. The connectors fully sustained the applied loading, with no failure during the time spent in the furnace.

Being the first of its kind, the full-scale fire test confirmed that the MTC beam hanger connectors can use wood cover and proper wood routing as an effective fire resistance method for connections in post-and-beam framing systems. This uses the concept of a sacrificial char layer from the combustible material to protect the non-combustible material, such as the steel connectors and screws. Additionally, as the steel plate of the beam hangers are narrow, smaller beam sections can be used with one- or two-hour fire ratings.

The First Tech Credit Union building is a great example of modern mass timber buildings at its best. Based on a case study done by the APA–The Engineered Wood Association, the First Tech Credit Union building was able to save 4 percent in overall costs compared to a traditional steel structure. Part of this was achieved by taking advantage of the drop-in assembly of these connectors and their simple fire rating requirements.

Designing with the MTC beam hanger is simple. These systems have standardized design tables for both the connector capacities and geometry requirements. Designers can simply identify what capacity they require for their projects and choose the appropriate beam hanger. The connectors have capacities up to 318kN and can achieve two-hour fire rating requirements. As taller mass timber buildings with higher fire rating requirements are becoming more common in North American, designers will require more versatile and reliable connecting systems.

The RICON S VS connectors are one of the most versatile beam hanger systems as they can be placed in wood-to-wood, steel-to-wood and concrete-to-wood connections. These special connections are possible since the RICON S VS connectors can be welded onto steel plates. To account for the different installation tolerance levels between concrete and timber elements, it is recommended to use adjustable embed plates in concrete-to-wood connections.

Staggered connector configurations are used to accommodate narrower beam sizes. As seen in the previous pictures, the staggered connection was utilized in the First Tech Credit Union building for narrower posts. Some special geometry considerations must be implemented, such as always having a clear path to the collar bolt; therefore, in staggered configurations, it is not possible to place the connectors on top of each other.

The routing for the fire rating can be placed in both the girder (main member) or joist (side member). This allows for greater flexibility while working around project constraints. Routing into the joist will require a wood plug at the bottom for proper fire rating, which can change the clean aesthetic of the connection. Therefore, if possible connection constraints allow, it is recommended to route the girder instead.

The RICON S VS connectors can be used easily in sloped and skewed connections because the beam hanger connectors only require two parallel faces, which is why they were the perfect fit for the Rocky Ridge YMCA’s double curvature roof structure.

For this project, approximately 1,800 RICON S VS connectors were used. The pre-engineered aspect of the connector aided in the design of the double curvature connections. In sloped and skewed connections, the most important design consideration is using the right length screw to not poke out from the other side of the wood member.

MTC beam hanger systems are one of the simplest and most cost-effective connectors on the market, tested and proven to work in many large projects throughout North America. MTC Solutions is committed to the continuous improvement of its mass timber connecting systems, and with that the company also supports the future of the mass timber industry.

Who is MTC Solutions? 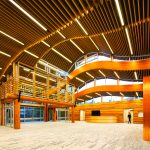 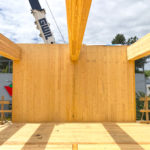